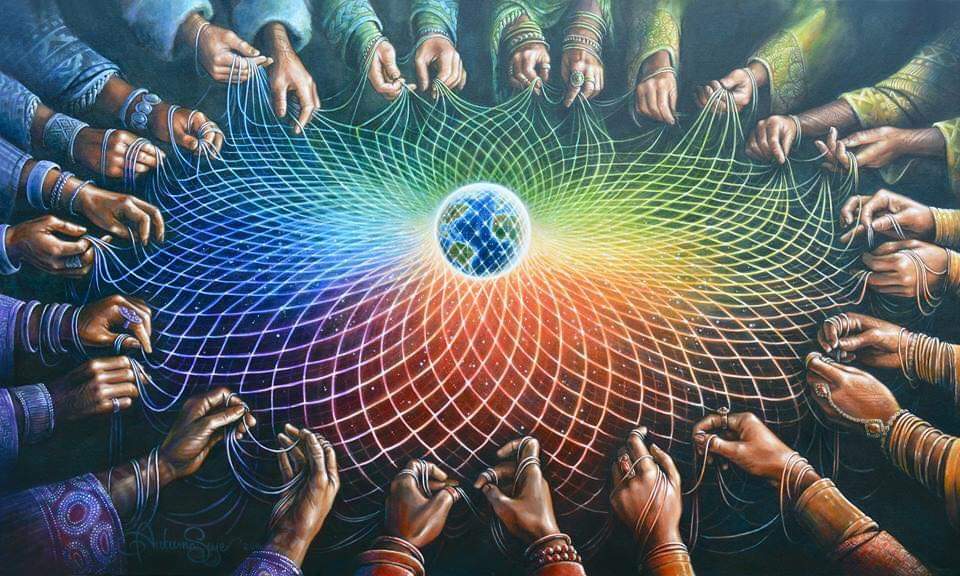 After a period of voluntary retreat, I suddenly find myself behind the computer. It’s time to shape a new world. It’s time to take our rightful place in the universe.

Since we turned our back to God, slowly but surely, we lost the connection with Mother Nature, with our true nature. Greed became our new religion. We associated ourselves more and more with the outside. We derived our identities from status, from possession, and if this was not sufficient enough from a conviction or belief system. In short, the ego wants to be seen and has an insatiable hunger to distinguish itself.

The media and advertising are constantly feeding this concept. How do you sell something no one really need? Give the consumer the feeling that the product in question adds something to their identity. Once purchased, soon the greed for more starts to resurface…

After the Second World War, life became increasingly manageable. We created a tomorrow, took care of the future, and gave ourselves a sense of false security. Everything was divided into boxes, risks were removed. What science could not prove was referred to the land of fables. We learned we had to fight and went on war against disease, terrorism and other imaginary enemies, we had created ourselves. Despite our fight against cancer, there has never been so much cancer. This includes terrorism and everything we thought we needed to get under control.

Did you know that incorrect medication and vaccination is the third cause of death after cardiovascular disease and cancer?

With this carefully prepared pandemic, we are beginning to realize that our control has literally been taken off our hands. It is the fault of those in power: the WHO, the world governments and the multinationals. Imagine that we dare to admit that we are not in the least victims and that we have all created this together. Then there is work to be done!

It has apparently never occurred to the masses that our government’s policies would stand no chance if the people refuse to follow up unreasonable and absurd measures. And of course, those in power did it very smartly. We become, or rather, we let the mass media brainwash us 24 hours a day and blindly believe what they give out. If we think otherwise, it is referred to the realm of conspiracies.

Not only have we failed ourselves, we have also referred our elderly and infirm to the realm of senility by wanting to decide about their lives and their well-being.

Let me be clear. We cannot go back to the old ‘normal’ because that was abnormal in every way. It is too crazy that a small minority, at the expense of the great majority, is enriching themselves, exploiting and plundering the earth. If we are willing to share, there is abundance for everyone…

In exchange for certain privileges and the appearance of security, we have gradually relinquished our responsibilities. This got so serious that we couldn’t even think independently anymore. Now we are losing our acquired freedoms. Slowly but surely our eyes are starting to open. However, the masses are terrified and entangled in the visible play of illusions.

As long as we say I, me and mine, as long as we identify ourselves with what we have and not what we are, we will fight wars, oppress others and let ourselves be manipulated and vaccinated out of laziness. Fear, guilt and a sense of duty are the perfect ingredients to keep the people under control…

We have created a culture of victims and vulnerable ones. We protect the weak and punish those who make it visible. A natural approach would be to reinforce the weak. Real life is simply too heavy for the faint of heart.

We also do that in medicine. Since we are no longer allowed to be ill, we weaken our immune system with medication and vaccination. We may be getting older, but the quality of life leaves a lot to be desired.
Ever met a healthy person? You can recognize a healthy person by his vitality, the inner joy he radiates. He can have all kinds of ailments, but the light of love shines through him. His smile touches many hearts.

To live is to have guts. Celebrating life means pushing boundaries. Living is daring to take risks. Your body becomes strong and healthy when it survives and transforms diseases and resistance. Herbs, homeopathy and acupuncture naturally strengthen our immune system and support the process of becoming truly healthy.

On an emotional and spiritual level, these are attributes such as ayahuasca, iboga etc. A fantastic way to bring out your true potential by making hell, which masks the gate to heaven, visible in yourself. After all, without the dark there is no light.

In that sense this way cannot be compared with most forms of therapy which usually aim to make you a full member of the herd. And so, our uniqueness became increasingly more embedded. However, you turn or turn it, it is not the mass that change the world, but the loner who has the guts to turn his back on the flock and wakes up…

Life is a gift

In this day and age when it is no longer possible to flee, we can do two things. Or we take the role of victim and point accusatively at others. Or we stop doing that and start to face our fears and to feel them step by step. We put the TV off and start investigate ourselves.

Now we have the time to embrace ourselves and to feel how our life-energy is moving in and through us in a playful way. We start to feel who we really are. We are not material beings. We are energy, awareness, mystery, a miracle. We cannot unravel the mystery, so just let the miracle be the miracle. Do not try to know the unknowable by giving it a scientific framework. That is absolutely impossible.

What we are is nothing – is emptiness – is boundless space – is silence. And in that quiet space there is no room for fear. There is no longer the sense of my house, my wife and my car. There is only Being and this one moment. Fear arises when you live in the future and are afraid of losing something you never owned. We do not know what the future will look like. That is constantly changing and has everything to do with this present moment…

For me there is no fear. For me there is no distance. Since I’ve sensed death, there’s no reason to be afraid. I can still see myself lying in bed in a mud-brick house in South Africa with a young mother in my arms who died of AIDS. I see toddlers dying in the AIDS clinic in Boksburg. “If there is a God then this isn’t the way it should be,” I thought. Then I was allowed to see what really happened. That which we essentially are is eternal and unchangeable and can never die…

Life is giving and taking. Life is a struggle. Life is dying in every moment and being born again. A true spiritual being is fighting that battle within himself. A true person is willing to face his own imperfection. To face it is the end of imperfection.

Eternity comes into view behind all apparent duality. Then we stop wanting to be something or someone that we are not. Then the soul will shine more and more through our body. We become more or less transparent. We literally become Beacons of Light spreading joy without doing anything. Because as long as we still think we have to do something, we are not yet in the dimension of Being.

Fleeing is no longer possible

It is the right time to shape the new world. Time to take our rightful place in the universe. That has nothing to do with the outside. Freedom is an inner state of being. No one can limit our true essence. They can throw us in jail. They can force us to get ourselves vaccinated. They can kill our body, our temporary shell. But what we truly are is eternal and immortal and can no longer be denied…

In the Light of Love
Yasmin – I am U