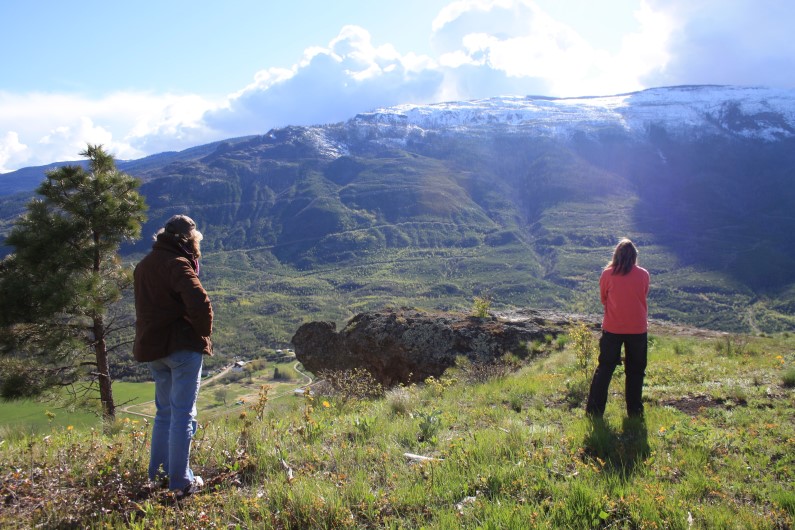 Until the moment of awakening we often create our own reality. We do not see what we already have and focus on what we wanted and that is generally something outside of ourselves.

At the moment we have moved to the place of our dreams the reality turns out to be different. We start to realise that it was only a dream. We start to see what we already had and if we are not careful we will start a new dream. Anyway, all these movements on the outside sooner or later bring us into contact with our lost paradise which is not outside ourselves but inside the core of our being…

Ten months ago my friend Chantal and her partner emigrated to Canada BC. Seven months later they settled on Vancouver Island. Therefore my base will be Victoria on Vancouver Island. The summer that started far too early in the Netherlands is too late here. It remains cold and wet. Chantal and I decide to go to the mainland and throw our camping gear in the back of her car. We buy a small tent of 2 by 2 and a gas burner. Believe me, if you want to test your friendships, camp three weeks together. If you survive, you will survive any crisis together!

Towards the Rockies, in Silver Creek in the Shuswap District, I meet Sienie. Sienie is 80 years young and sparkling with energy. At the age of 22 she fell in love and took the boat to Canada. After the death of her beloved one she does all the work on the farm on her own. She has a tremendous spirit and looks like a guy of 40 when she drives the tractor! She lives on the foot of Mount Aida with has a powerful energy. Here we catch a first glimpse of bears.

The snow has not melted everywhere and many National Park is still closed. In Banff we enter the heart of the Rockies and finally we can walk different trails. Wow, what an impressive surroundings. No, places like Lake Louise can not attract me. Too touristic. I prefer the pristinely of Lake Johnson. I feel uplifted into my bones. At sunset, at Lake Minnewanka, it start to be busy on the road with moose, deer and chamois’s. We see an owl and have to stop our car for a newborn fawn when she crosses the street.

We camp on rivers, lakes and in National Parks. On the way back, between Kaslo and Nelson, we camp in Kokanee Glacier Prov. Park. The environment is absolutely beautiful. Doing qigong in the silence of the morning at the lake with views on the snowy peaks is absolutely magical and energetic.

Apart from the world

Canada BC, if you want to escape the world or you love skiing and long winters and hot dry summers, you have to move there. There seems to be nothing of violence, the world seems to past you by. At the least, when you dig a little deeper, you’ll stumble across the hidden suffering of the natives, what the Government is trying to resolve by giving them a status apart. This is undoubtedly the result of old guilt feelings and makes the differences even greater. You will meet this phenomenon also in Australia and New Zealand.

In a country that is 200 times as large as the Netherlands there are living lesser than 40 million people. The distances are huge. Very relaxing to drive but sometimes also a little bit boring. If you are sensitive even a little bit depressive by now and then with all the pine trees. Suddenly however, the landscape is spatial and energetic again. Watch out for bears! They will come into your tent if you have food there. We have seen some, they look cute like teddy bears. Elk, deer and chamois are also abundantly present. The eagle is a national symbol. You see them frequently. They are breathtaking.

It’s one of my greatest passions to gather wood and make big bonfires. I enjoy the sober lifestyle. So sober that I lose 5 pounds in the first three weeks. You rarely see fat people in Canada. There is no consumerism in the air. During the day it’s nice and sunny ‘doing-weather’, at night it is around freezing. We soon understand why so few people are camping this time of the year. We sleep with all the clothes we carry with us! The last night on the mainland we camp on a river between rough mountains in the Cathedral Park far from the road in the Similkameen district. I feel more than before the magic of the Indians. Here I should have stayed longer!

Back on the island it is done with camping. It is too wet and too humid. But the reward is a huge variety of hikes and a greater difference in nature. Rainforests, rivers and sea. Exciting trails with whales along the coast. If you are outside the tourist area, frequently you will manage to be on your one. Stay alert for bears. That is the only challenge in Canada. The only thing comparing of the USA is the American way of greeting and the huge cups of coffee. Canadians live their own lives and the outside seems totally unimportant.

In short: a country where the misery of the world seems to be far away and where the huge clean skies absolutely charge your battery. Always carry on the island sunglasses and a raincoat, because the weather is changing even faster than your mood. The cloud formations are beautiful. If you like to uncover your inner depth, it is the right place to be. No longer you can hide yourself or any of your illusions. In the longer term you probably start to miss the challenge and inspiration to develop yourself. Let me put it this way: Canada is not an entertaining culture, and you have to find your impulses and challenges in life within yourSELF. Anyway, it’s just what you need right now!

My house is decorated with flowers and cake. I stay for the first time in one month outside until late at night in my summer dress and I enjoy this also at the fullest…