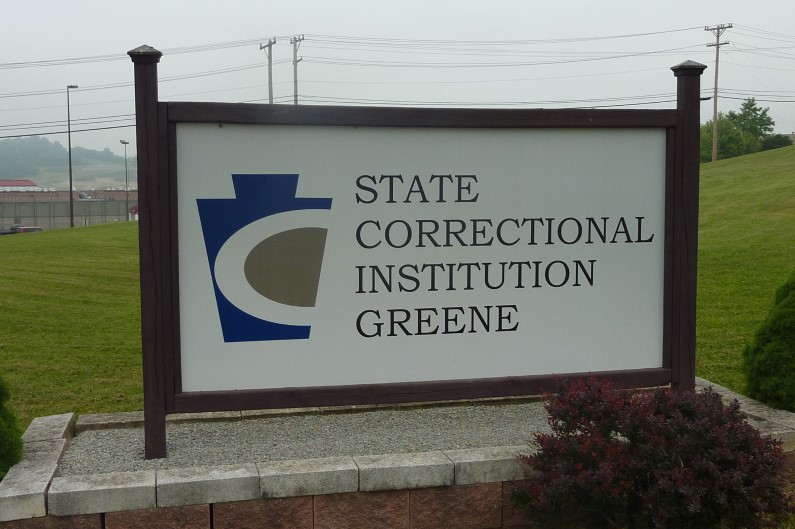 He never wanted it: corresponding with a ‘foreigner’. After 20 years I was the first one. Soon I will sit in front of him. He cannot believe it.

That a white woman undertook this whole journey just for him, a black one on death row! He is overwhelmed. Believe me, a trip it was! It kept him from sleeping. He asked his son to support me…

After 24 hours of travelling and staying overnight in Pittsburg, Martha picks me up. We drop my luggage in the hotel and go directly to prison. This first time we walks the whole process together until the visitors cell. She is a lawyer and shares her concerns about politics and people who are innocent on death row. It is a sad story but in the meantime no longer unknown to me!

All of a sudden I sit in front of this beautiful Muslim man. Peace of Mind! Since they took everything of him he started to unfold his true Self. No, that was not from the one day to another, that’s for sure! I look in his eyes and put my hands against the glass. Open-minded he looks back and puts his hands against mine. He is as I have imagined. Last night he could not sleep. It was terribly exciting. He does not like me to walk to prison. Americans do not like walking! But I love it and will do it the rest of the week. It feels lovely to fill my lungs with fresh air! Even if Aaron has a good contact with his family, visitors are rare. Because I come that far we have five days after another, six till seven hours a day! It asks for extreme concentration with all the sounds on the background. Caused by changing of the guards or a screaming inmate restrained by pepper spray. Believe me, it feels so good to be here!

His story begins where many stories begin. Not only in Africa but also among the African Americans. As a child he was regularly beaten. According to Aaron a legacy of slavery. Going to university, on the age of nineteen, he made a girl pregnant. He wanted to take the responsibility for it. So he stopped his study to take care for her. The simple job brought little money in. Around him he saw people with big, expensive cars and beautiful houses. He should also be able to life like that!  No, he felt not afraid. It was just exciting! His dream became truth. He could give his family a better and luxury life. He was widely honoured and respected.

We drink in each other’s energy. The only thing I use during the day is a bottle of water, he has nothing. I get not bored for a moment. We have triggered each other from the first moment. What appealed to him that I did not put him in cotton wool and did not show any pity for him. In short, I treated him the way I like to be treated by others. In the meantime I have some experience with Edward in Texas and in prisons like Holland and Curacao. I accept Aaron unconditional and I love him as if he is a part of me. And of course he is! What is touching for him is that I absolutely have no judgment about him.

Meanwhile, he takes full responsibility for the decisions he took in his life. He like to call it wrong decisions. That our decisions are wrong, well we will discover that afterwards. Basically, the decisions we take bring us through different life experiences. Going trough experiences is the only way of evolution. It makes us richer or poorer. As strange as it sounds, Aaron is in many respect richer then before. The price he paid was not small. Almost all people who honoured him when he furnished them with everything they wanted, turned their back to him. Painful, very painful! He felt rejected and abandoned.

You can not even imagine how it feels to be twenty-two hours a day and in the weekends the clock around to be in solitary confinement. You can not even imagine how it feels never to be touched by another soul. Meanwhile he gets that touch directly from the source, that is what he is showing me! He was only twenty-eight and his youngest son was a toddler when he got behind bars. He loves his children and grandchildren with the love of a wise one. Speaks and hears them regularly on the phone. Three times a week he is aloud to make a short call.

We reveal ourselves to each other. If you have so little to lose, you have little to hide. Our communication is intense and intimate. There is no shame. Regularly I see him walking out of the prison. He shares that his spirit is travelling everywhere. He is independent and free. Pennsylvania is one of the toughest prisons. In contrast to Texas, where you are aloud to touch each other but where they kill more people than anywhere else, here they do not execute people easily. The government wants to abolish the death penalty. The last executions were in 1999. They were voluntarily. Those people no longer wanted to fight. Even if the death penalty will be abolished, normally Aaron will stay behind bars till he dies a natural death. He embraces life as well as death. He is in a constant shape of acceptance and meditation. I feel privileged that I got in contact with him. Energy attracts energy. How wonderful! His name means the realized one…

This last day there are regularly periods of silence between us. Everything we wanted to say has been said. I wish you came over to America. You’re so broadminded. If everybody should think like you the world should be different. That’s right my dear Aaron. But it is by embracing life at the fullest that this transformation inside took place. Making myself vulnerable and no longer wanted to be superior, no longer I feel the need to judge somebody else. In short, going through life in all its depths and heights has changed my life at the fullest, as your situation has changed your life! Simple, you never should have believed you could better stay far away of the world of the drugs if you were told in advance. You had to experience it first!

Take me with you

Take me with you, Aaron says. I take you in my heart, you are always with me, always within me. I put my hands against the glass. He presses his hands against my hands. I love you. I love you too! I turn around to leave the cell. Aaron will be put in chains before they open the door. Put in a strap he will be returned to his cell. Meanwhile the guards know him and treat him with respect. For the last time I look to him while I walk the long, long, silent corridor. Easily I find my way out through the controls. Except a few lawyers, I was alone today. And then to know that there are 1500 people behind bars and another 250 on death row! Tomorrow dear Martha will bring me to Pittsburg-airport. First we will have lunch together. I will take the plane to New York. There I have to spend a night before I can fly to Miami and Curacao. The guard at the desk has become more human. I sign the list and step outside. I breathe in a few deep breaths of fresh air and for the last time I walk to my hotel. It’s a beautiful day…