One Love – One Tribe 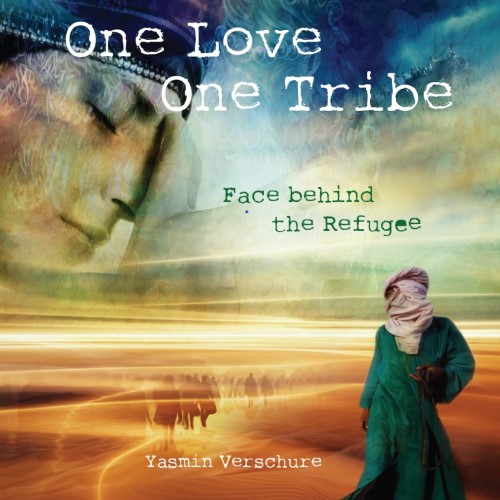 The more I listen to the stories behind the refugee, the more I discover that every human who has the courage to make the crossing, and literally looking into the eyes of death, has a reason to be here. It is not up to me to judge whether this reason is correct, yes or no.

I dedicate this book to you

are lonely
are normal
are a human being
are unique

‘There is no difference between you and me. Today you are on the run, tomorrow I may be the one…

The world is on fire. It is not just the refugees. We live on an atomic bomb. The sea is full of plastic. The air polluted. Our food poisoned. Natural healing prohibited. At any moment we could fly into the air.

Peace on earth is an illusion. The only place we find peace is inside ourselves. If we are in peace with ourselves, we will see the world differently.

More than anyone else, I realize that life is suffering. By embracing my experiences and not excluding anything, I am no longer attached to it. No longer am I searching for happiness. How can I turn the sun into the moon?

One cannot exist without another. The more we pursue happiness, the more we suffer.

How on earth can we learn our lessons if we do not meet challenges on our path. How can we free ourselves from our belief-system and conditions that keep us from being what we are in essence: pure vibrating divinity, which by light and dark – pain and suffering – remains unshakably divine.

Pure spirit, always on the road. Always open and sincere. Curious as a child.

Unfortunately, we do not want to know

We bury our heads in the sand because we do not dare to live in a society that can collapse at any moment.

Everything visible is temporary. Everything constantly appears and disappears. What remains is love…

Here on earth we are all refugees. We need each other. The refugee need our open arms and we need their spirit. Of course, there is chaff amongst the wheat. If we do not want the chaff, we will miss the corn.

The higher the walls we build, the more they will succeed to find the holes. Even with all the money in the world, we cannot stop this flow. Why should we, it is a great opportunity for transformation and new life.

We evolve through experience. Living in a safe and stable world is just a fantasy. By accepting that life is constantly changing, we become the drivers of our lives. When we can surrender ourselves in every moment, without fear for tomorrow, we can feel safe in every situation. Wherever we are, whatever we are going to face.

And yes, it is true. People discriminate. We all do. The ‘normal people’ and the refugees. The blacks and the whites. Just look at it and continue breathing.

People remain people. We cannot change the world, we can only change the way we look at the world. When we love and respect ourselves, we can embrace every ‘stranger’ without losing our own identity.

This requires an open mind. Often aid workers, with good intentions, make clients and refugees dependent. That gives us a good feeling and makes us indispensable. That attitude has to change. Stop thinking that they need us. We need each other.

Camp Moria on Lesvos is the forerunner of a world that willingly or unwillingly, will mingle. Moria is a place where people transform. There are no grades, no caste, and no class system. In times of war, in situations where people have to look death into the eyes, people transform rapidly or they sink even deeper into their experience of human suffering…

I was watching the documentary: ‘Witnesses of Piraeus’, about refugees in the port of Greece. The testimony of Petra Hubbeling from the Zen-Peacemakers touches me. She starts her journey with empty hands. I feel this is the right way to go…

We Westerners are so eager to do something. We like to know in advance, what others need. We are afraid to be empty handed. Being with empty hands means that we are open to all that is. To meet the chaos, the suffering, the pain and the joy, without having the need to change anything. That is the most difficult and the most beautiful way that there is. From that attitude, anything can arise and grow. It requires not only an open mind; it means that you dare to be touched deeply inside your soul.

In July 2016, Giri and I flew to Pireaus. After they closed the Refugee camp at the Harbor of Athens, we decide to go to Lesvos. In October, we went back. This time by car and for almost half a year…

We meet people from more than seventy countries and cultures. Apathetic people, sad people, happy people, wonderful people and above all, brave people. Being together with people from so many different cultures and listening to their stories, has enriched my life enormously.

Everyone, whose eyes I looked into is forever in my heart…

Eritrea has one of the most oppressive regimes in the world. Criticism of the government is forbidden and opponents are arrested. Military service, which may last for more than ten years, is a reason for many to flee. Eritreans may not leave their country without the permission of the authorities. Anyone who tries to flee illegally can be shot down. Deserters and refugees are cruelly punished and family members can be arrested…

Like every young man, I had a combined military training. I collected enough points to do two years in college. I wanted to become an economist, but the regime forced me to become a teacher without payment

“Soldiers surrounded the school where I worked and recruited all 18-year-olds and elders. Without eating and drinking, without a farewell to our family, we had to walk hundreds of kilometers to a remote area in the Djibouti desert to be trained…”

“We were brought to a camp in the desert. I did not want to kill people, so I decided to escape. They sent the dogs after us. We ran for hours and managed to chase the dogs away with sticks.

Eritrea’s nomads who live at the border helped us to cross the border with Sudan. They sent us to the United Nations office and they brought us to a refugee camp. I was there for five months without a job. No one could help me.”

Mukasa escapes and finds work at the border of Sudan with Eritrea. Every time he crosses the border to Khartoum, they arrest him and bring him back to the refugee camp. He loses hope and looks for a smuggler who can take him to Israel. He ends up in the Sinai in Egypt.

“The mafia lives in the Sinai. They are not humane and sell not only drugs but also people

Finally, Mukasa finds a smuggler who promises him a safe route to Israel. With other refugees, he is loaded into wooden boats, twenty-five people each, to cross the Nile. Two of the three boats sink before his eyes. Helplessly he is watching how nearly thirty people drown. Only a few can swim.

“I still hear the shouting of the people while they drown. We cried and shouted. Anglers took us out of the water and stole everything from us. Again we had to look for a smuggler and after fourteen days we continued our journey.”

“The Bedouins kept me two and a half months in the Sinai desert. The $ 3,500 ransom they asked had to go to an intermediary in Eritrea. If you do not get the money, they cut your fingertips one by one. I was lucky Yasmin. They beat us and we barely got water and food. At night, we had to work in the construction. Finally I collected the money and entered Israel.”

Israel took forty thousand Eritrean guest workers for a period of four years. Government leaders found they were ruining the Jewish culture and none of them got a residence permit. On December 27, 2015, they were no longer allowed to work. They had to enter the camp. Their Israeli friends were very worried.

The boys got three options:

Mukasa knew that some people reach Europe through Rwanda. He chooses to go for Rwanda, puts his savings in hands of a friend who will send money when needed, and leaves for Rwanda.

“There are small checkpoints everywhere, manned by teenagers with guns. We have to pay until we arrive in Khartoum, the capital of Sudan. Regularly we are arrested and thrown in jail. After nine months, I start to go crazy and I decide to leave Sudan.”

Mukasa flies to Istanbul with a fake passport and arrives at Lesvos after the necessary hardships in June 2016. His incredible escape route has cost him nearly twenty thousand dollars. Finally, he is free! To be locked up again in a detention camp. His emotions are visible and his pain is tangible, but his spirit is unbroken. Mukasa honours his name. He is really an angel in his care for men as well as woman.

Although Eritrea is still at war with Ethiopia, that does not apply to the people. In Camp Moria, they live peacefully together and built relationships beyond borders…

According to our nuclear physicist Mostafa from Iran, there are two types of refugees: Those who need to flee their country because they are in danger, due to war or other political or even non-political reasons. The other type we can describe as the economic refugee, the fortune hunter, the adventurer.

They are being woken up by the media and by the time-spirit, and this way becoming curious to explore other places in the world. Not only they do believe in their dream that Europe is a Valhalla in terms of money, they also believe they can enjoy, undisturbed, the fruits banned in their own country, such as drugs and alcohol. In short, the economic refugees.

The more I listen to the stories behind the refugee, the more I believe that it is more complex. More and more I discover that every man who has the courage to make the crossing, and sometimes literally looks death into the eyes, has a reason to be here. It is not up to me to judge whether this reason is correct, yes or no.

Are they asking us why we are going to Africa to explore their country, and play the unbridled tourist, without regard for the fact that the majority of the population is suppressed or poor? Let alone that we like to think about the fact that the oppression or poverty is perhaps the result of our intervention…

He looks at me.
“We are crazy huh Yasmin.”
“Yes beauty, you are absolutely crazy”
I answer without judgment.
“What is your heart telling you?” I ask.
“I want to go home. I want to see my wife and children. I dream about them. I will go Yasmin. I promise…”

Three days later, he tells me that he first wants to go to Italy to earn some money. I know it is useless to get back to it. Let him experience what every soul wants to experience himself…