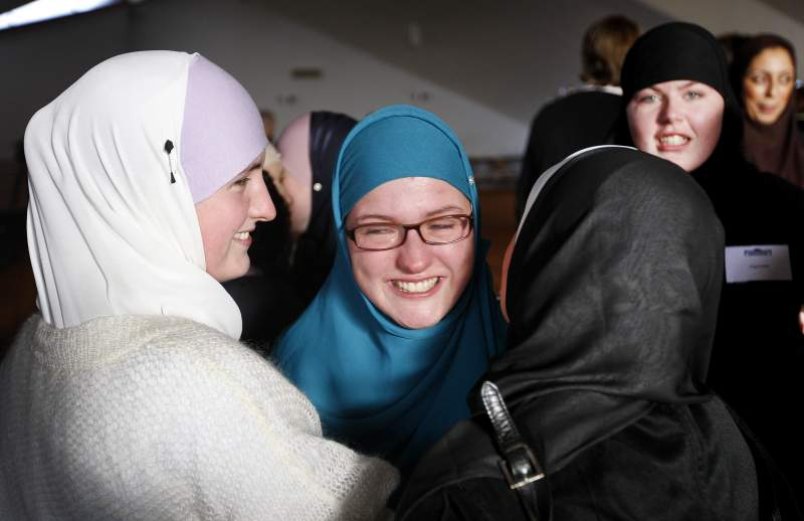 Because for them it is of no importance if I wear a headscarf or not, but out of respect for a culture who have devised rules and regulations and has accepted them as truth. After the service an Iraqi literally throws his aggression against the West over me. I am overwhelmed, but do not feel addressed. I’m not a member of a group, but an independent thinking individual. Suddenly I stand hand in hand with a beautiful boy from Somalia. I wonder what he could have done wrong! He is not interesting if I am a Muslim. He does not invent a new framework by calling me an atheist (which his friend immediately did). He is in every respect a true human being.

I join the Imam during his mosque service in prison. He thinks the men will appreciate it if I wear something on my head. It is not an obligation, but still. And so I cover my head – voluntarily – out of respect. Not out of respect for God or Allah…

Call it coincidence: on the way back home I listen in the car to a discussion about a male teacher who refuses to shake hands with his female colleagues. The question is if we should tolerate his behaviour or not.

For clarity: religion has an inside and an outside. The inside is unity. The majority however associate themselves with the outside, which is created by man. Unfortunately, in our separated state of being we can not see the truth and we create nothing but division. Divide and conquer and keep the mob under control has been the slogan for decades. It is not the inside or the essence of religion we have to concern about, but the outside. Would this man really believe that it is an eyesore for Allah when he should treat his female colleagues as he wishes to be treated himself?

It’s too crazy for words. How would an all reviewing power we call God or Allah being interested in such trivial matters as the difference between men and women? Are we forgotten that God or Allah symbolizes nothing more or less as unity and all of us have emerged from that same unity? In short, any sane person knows that this is a pertinent lie. At this way we degenerate God into a kind of an ego-thing and sorry, that is God unworthy. It is even abnormal, or better said unconscious, as the Christians in the past who were convinced that they had to rescue other cultures they called primitive by saddle them with their self created image of their own deity.

Kindergarten work! Grown ups cannot longer think like that. It is all ego, nothing more than ego, who always wants to be in the right. And that is exactly that piece of ourselves we should get rid of! Anyway, physical life may at the end an illusion, but it requires a number of clear rules. When I go to India I eat with my right hand and cover my shoulders. Although I do not pretend to be one of them on the outside, at the inside I am one with all and the same. In all respects I voluntarily will follow some of their rules without losing myself.

Essentially we are a tolerant nation which really likes to embrace and welcome others. It is normally that we will be restricted by our own human limitations. I think it is natural that everyone who wants to live in this country and is using the luxury facilities we all created together, in return has to accept a number of rules. In that respect, life is no different from sport. To play sportive football, we must embrace certain rules. It is a privilege and not a right that everyone in this country may practice his own religion, while Christians in their homelands are threatened and persecuted. That is something to be truly thankful for! Unfortunately, we are caught in webs of fear. And that fear makes that we consider everyone who is different as a potential enemy of our freedom.

Why are we so afraid to name those things? Because they can be only appointed when we have gone through hells of pain and suffering and no longer are trapped in the web of duality and self-created fear. I like to share my wealth and should like to be an open door for anyone who needs an open door. I know a great guy, he is now 25 years. His family has a residence permit. He does not, he was arrested in the past for a few futilities. He behaved himself amazingly well and for many he was an example in the community were he lived in.

But suddenly he started blowing again and lost himself completely. Is it surprising? To be outlawed is inhumanly cruel, especially if you are so young. Undoubtedly, and almost inevitably he ends up in criminal circles. The cause is the same system who tries to be tolerant willy-nilly and performs endless discussions about wearing headscarves or not. The point we miss in this infinite paradise is clarity. Endless debates, each time more and more commands and prohibition. But the essence remains unclear. We miss the power of an adult and enlightened leader!

During a meeting, I have a nice conversation with Achmhet. He is in his mid forties and half of his life he lives in the Netherlands. Do you enjoy yourself, I ask. Yes Yasmin, completely. Do you feel discriminated here? No, absolutely not. Do you agree that whenever we feel discriminated it says also something about ourselves? Absolutely Yasmin. To be frank Achmhet, I’m not really into all those outer churches and mosques. Shall we make a joint house of prayer? Sounds like a good idea Yasmin. In hospitals and airports it is already like that. Wow Achmhet, we have started a first step to brother / sisterhood. Come on, I’ll give you a kiss. Okay, for today we just will shake hands …

I do not assert that discrimination does not exist. People who are stupid and ignorant will discriminate. Fear is the cause. However you can assure that people who feel discriminated also tend to discriminate. When the whites were put out of play in South Africa the different tribes started to fight each other. In short, people who believe in separation like to manifest themselves, to fight and to win. Therefore it is important that we find our way inside, because only at that level – individual – we can connect ourselves with our true nature and with others. Not because God or Allah wants it or culture prescribes it or whatever. Our mission is to be independently minded beings who are no longer wanted to hide ourselves behind the code and the safety of the herd, but mature and independent dare to decide by ourselves what is good for us.

The moral of this story: exterior is shape and represents separation. However, it is the same visual world that eventually will teach us to transcend the duality. In essence all religions preach the same, but on the outside they causes divisiveness. As long as we belong to a club, religious, spiritual or New Age (nothing more or less than a new church form) and use this form to raise ourselves above others, we keep separation alive.

The solution is awakening, an inner and individual process. At this time we become spectators. We live in the world without looking down on others. We are no longer of the world and we do not participate in the ego play because we see through it. The ego ultimately only wants one thing: keep the separation alive so we can dominate others. Let us stop making outward wars, but start the inner battle. Let us sacrifice our sacred cows to the foundation. Let’s take our sword in our own hand and free ourselves from all restrictive ideas we have adopted for truth. Chase no longer euphoric feelings and a certain state of enlightened. It is yet another game of illusion to escape of the truth. Instead of all this allow yourself to face yourself HEARTHly and honestly. It is the only way to silence the ego!