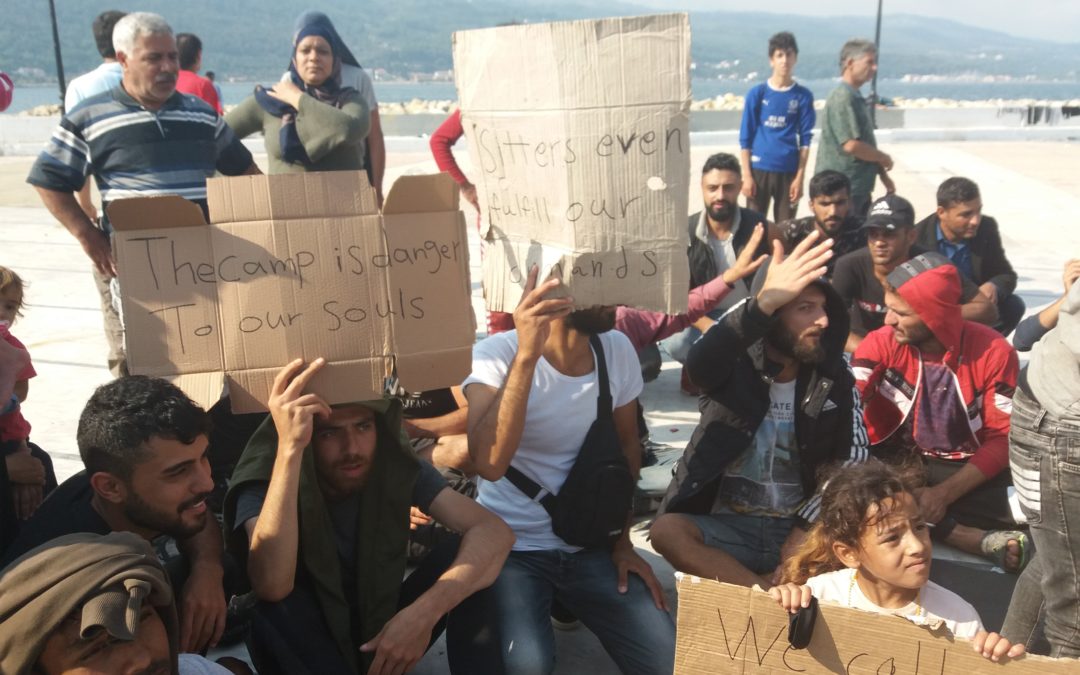 If we make their life as difficult as possible, they will stay away. That was and is the policy in the Greek detention camps. You stand in line for hours for food that you only eat because you have to fill your stomach or you choose to do that from your monthly contribution even though the Greek government gets around 6 Euro a day to feed you…

Here in Samos there is very little support. The result is an enormous spirit to survive. The refugees have to buy their own tents so they prefer mostly to built something better for almost the same amount of money and they cook their own food if possible. “Well, that’s not how it should be,” the mayor says. “It is not a holiday village here…”

Every asylum seeker needs a medical certificate. Your procedure will not start without having one. In the past, every refugee get an appointment for the hospital by the only doctor in the camp. That policy changed drastically with the arrival of the new government. The entire translation team got fired and people had to stand in line before their appointment. So they spend their nights in front of the hospital in the bitter cold, hoping to be among the lucky ones that day.

This too has been stopped. Now the newcomers get priority and the people who have been staying here for months or even years are no longer visible…

Previously you had to renew your registration card every month. Your name was on the board if it was your turn. No discussion.

Now this has to be done every 14 days. If you are delayed for 5 days, because the system cannot handle it, you are simply thrown out of the system…

At two o’clock in the morning, Toure stands in line with 95 others to renew his registration card. Toure is fortunate. He managed within twelve hours. Just before they are closing.

Bassirou and many others are less lucky. He did not make it and is back in line from 1 o’clock pm. He hides his frustration behind his eternal smile. My heart is crying and not only that. I’m furious. How inhuman can we be.

If you are 5 days overtime, even if it is not your fault, you will be thrown out of the asyl system. Then you have to look for a lawyer who has to make things right again. You have to pay for it of course. The lawyer gets ten days for appeal. Usually this is impossible.

If it fails, the boys go to prison in Mytelini on Samos island.

Here all – mainly single black men – from the different islands are brought together and get deported to Turkey. At the moment this are around 30 a day…

In Turkey they usually go straight to jail and if they escape, they can’t go anywhere. If you find a job illegally, they will be heavily underpaid. As an African you certainly do not get asylum in Turkey. And without a passport you cannot go back to your home country IF you would be able to.

After the demonstration on 24th of January, where the Samonees demand that the asylum seekers only should be registered on the island and being sent back or being brought to the mainland, shocking opinions about refugees appear under Samos24 on the internet…

He is called Melak. In Africa that means Angel but here it means that you are crazy. “How does that feel,” I ask. He looks at me with his eternal smile and shrugs. No longer it affects him…

And YES, it may be said that also the blacks are not all sweeties. Mostly they fight more sympathetically than the Arabs, but they are stealing also.

When Bassirou sees that an African is stealing in the KiloShop, he warns him: “Hey, Brother, I wouldn’t do that. You not only give yourself a bad name, but all Africans…”

It’s here just like everywhere else. Most residents know every mistake from the boys. They do not see that the majority, let me say 95 percent, behaves exemplary under circumstances in which the average European would destroy the whole environment or get mad.

A friend here who has seen something of the world tells me that those people are lazy and nasty. “They only come for the money, are not civilized and have little or no education…”

I am speechless. I invite her to meet our friends in our house. She refuses. Imagine she discoveres how they really are.
Unfortunately, the majority think like this and the rest wisely keep their mouth, out of fear being banished from the island…

Of course I also understand the Greeks. This situation is not healthy. But let’s be honest. The Greeks are not only darlings and the asylum seekers are not all criminals. For many Greeks, the forced residence of refugees on the islands reveals their carefully concealed dark side, which they, like most of us, immediately project outside themselves. Our behavior is always the fault of others…

Let us send money to Africa so they can stay there, is the thought of many and also the policy of the European Union.

Sending money to Africa is not a solution. Policymakers might know this if they should have the courage to go there themselves and have the guts to live among people for a while. Then they would discover that government leaders usually nod yes and amen but put the money in their own pockets to enrich themselves, their family and their tribesmembers. And that’s not just because they are more corrupt than we are. Africans think and live completely differently. The family is central. Even if they come for economic reasons, it is not to enrich themselves, but to give their families in their home country the opportunity to build a better life and send their younger brothers and sisters to school.

Many do not come for economic reasons but because they have to flee their country for political or ethnic reasons. And in the end money is not the most important issue.
In 2020, people must be given the opportunity to spread their wings and broaden their horizons. Just as we Europeans are doing for decades with impunity. To become a real Human Being, all of us have to follow our soul desire…

To get to know yourself you must be able to compare. To appreciate your home situation, you must first experience how other tribes and countries are living. You can’t learn this by watching TV or through social media.

And let’s be honest. We have exploited Africa long enough. Long enough we wanted to play the leading role in this theater called creation. It is high time that others can take over…

Do not think that we can stop this emigration flow by erecting high walls or by building closed camps. It is just business. There are millions of people who enrich themselves with this. Not only the smugglers and the NGOs.

Apart from all of this, how on earth can we avert water from following its true nature and flow into the sea…

Traumas usually arise after they arrive here. You cannot compare these peoples with us Europeans. They usually do not have the conviction that it is our right to be happy. Life, death and adversity are matters they are confronted with every day and they usually process this in a natural way.

Once I joined in South Africa a group session. No therapist was involved. It was damn powerful. At the end of the evening everyone went home refreshed and renewed.

We Europeans and Americans have built an entire industry. We have raised normal live situations into problems so we can put everyone who deviates from what we think is normal into boxes and earn our money from it. After all the deviant, in the meantime almost the majority, need us to feel themselves ‘normal’ so they can safely return to the herd. The herd covers al that stands in the way of progress and transformation.

Inspite all the horrors those people have gone through, the moment they arrive on the islands, people feel grateful and happy. They achieved their goal and are convinced they are free. From now on it can only get better. From that moment, slowly and surely reality begins to penetrate. The prison in which they ended up here, no longer has open doors. Dreams are falling apart. Men in particular are not seen and welcomed. They feel unloved and and being failed in their role as protectors of the funerable: women and children. Every initiative to undertake something gets suppressed. Slowly but surely even the strongest are losing their spirit. They no longer sleep and fall prey to depression and terrible dreams.
The horrors they have experienced cannot be processed in a natural way and start to undermine them.

Women, children and families can go to the mainland. Single men are left behind. That they often had to leave a wife and children behind, which they miss immensely, is conveniently forgotten…

Do you really think that the black boys do not realize that they have fewer options than their Arab friends. They are not recognized and embraced and in advance they are seen as a problem. They are not even allowed inside many places.

In short, most people are not traumatized when they arrive. They become traumatized because they have to live in inhumane conditions. And if they knew there was a way out, they could even accept this too. But the blacks who are here for a long time, know in the meantime what is above their heads. They see it happen daily before their eyes…

How different the situation could be if we had the guts to step into unpaved paths. We would undoubtedly discover new possibilities. New enriching forms of living together…

The Greek demonstrators seemed unable to stop it. The construction of the closed camp at Samos is in full swing. What this will mean for the people and the island, I don’t know. Only God knows…

In the meantime, Turkey is sending their people to control the Greek refugee policy and Europe is washing their hands in innocence…

KURDS are stateless. Unlike the Palestinians, single men are generally not granted asylum. With the new government, Greece will deport them to Turkey. Europe when do you wake up…